We’ve expanded our annual Festival of Youth this year to include SIX concerts between Thursday 5th July and Wednesday 11th July!

Over 1,000 children and young people will have the opportunity to showcase their talents over the course of the Festival, which kicks off with a community performance of Newham’s Community Opera – Full Circle at Lister Community School on Thursday 5th July. On Saturday 7th July, Newham Music presents a dual-headlined concert, Afternoon at the Academy, featuring the Music Hub’s Academy groups and the Newham Groove, a collaborative ensemble made up young musicians from schools across Newham.

The Festival Finale takes place on the evening of the 11th and celebrates the very best of our young people from across the borough, including performances by Newham Music’s Bridging Sounds Orchestra, the Newham Grooves Children’s Choir, our vocal collective Urban Flames, and our London Music Fund scholar, Tyrone Musngi.

John Bergin, CEO said: ‘The theme of the festival is ‘Inspire’ and through the week of performances we will be inspiring curiosity and creativity amongst our young musicians, and exploring what and who inspires them each day. We truly believe that music not only inspires, but changes lives and we aim to provide the young people of Newham with outstanding performance opportunities, building their confidence and showing them the reward that can come from hard work.’

The highlight of the Festival is the premiere of our newly-commissioned community opera, Full Circle. The opera is the result of a year-long vision of Newham Music and Lister Community School to bring the wider community together to create something relevant to the people of Newham. It has been inspired by the story of Jonathan Lofulo, a Newham resident and former child refugee who spent time in prison before earning a first-class degree from the University of East London. Over 250 pupils and community members from five Newham schools helped devise the opera including the music and lyrics. These young people now make up the musicians and performers of the opera, which will feature on both the first and last nights of the Festival of Youth.

Adult tickets for the Festival Finale are available to purchase through the Theatre Royal Stratford East website, stratfordeast.com. Tickets to all other events will be sold at the door. 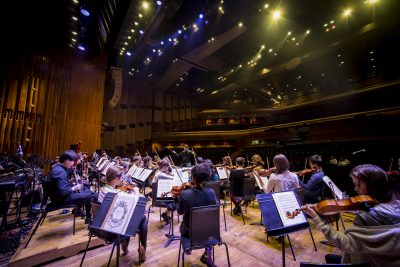