Newham’s Community Opera – Full Circle has been shortlisted for Outstanding Musical Initiative at the prestigious Music Teacher Awards for Excellence to be held in March 2019.

The modern-day opera took its inspiration from the life of Jonathan Lofulo, a Newham resident and former child refugee who spent time in prison before earning a first-class degree in Education from the University of East London.

Full Circle is the result of a year-long collaboration between Newham Music and Lister Community School, and from the outset, the goal was to bring together the rich diversity of the local community to tell a powerful story that would resonate with audiences from every age and background. More than 300 children and young people, working alongside community members from 10 Newham schools helped devise, compose and finally perform Full Circle.

On hearing the news of the Award shortlisting, John Bergin, CEO of Newham Music said: “In a busy modern world it’s so easy to miss the moments that can inspire us to think differently and to do better. Jonathan Lofulo’s story is one of those moments. His personal journey has inspired collaboration with Lister Community School, with local people, with local schools and hundreds of children, all of them coming together to create an opera that sings triumphantly to everyone who hears it. Music has the power to break through barriers and connect with everyone, and Full Circle has made its mark; a modern opera that resonates with each of us.”

Full Circle premiered at Lister Community School before going on to headline Newham Music’s Annual Festival of Youth at the Theatre Royal Stratford East. It was also performed at the Tower of London as part of the Water City Music Festival and will be part of the Newham Word Festival, Southbank Centre Refugee Week, and Music for Youth Proms in 2019.

Anthony Wilson, Headteacher of Lister Community School said: “I was delighted to learn that Full Circle has been shortlisted for the Outstanding Musical Initiative Award. Music is a powerful tool; it’s a universal language that can bridge the gap between people and change the way we engage with our world. Working closely with Newham Music and with so many children and local people has been exciting, and we’ve been able to create an authentic and compelling opera for our times.”

The Music Teacher Awards for Excellence celebrates outstanding achievement in music and performing arts education in fourteen categories including Outstanding Musical Initiative. The national event showcases the very best teaching methods and resources used to inspire creativity, passion and performance in children, young people and their local communities. The winner of the Outstanding Musical Initiative Award will be announced on Wednesday 6 March 2019, at a ceremony in London. 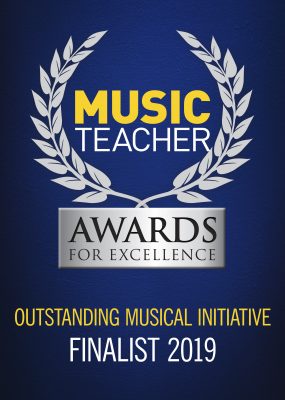